Why "I'll Pray for You" is Offensive and Condescending 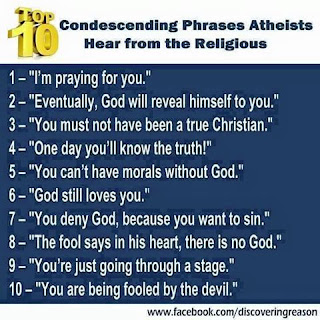 When I saw this, scrolling through my Facebook feed, it really hit home. I've heard every one of these phrases in some form or another. And each one was offensive and mean.

Having left a very strict and overbearing religion, my escape was full with anger and judgement. Misunderstanding led to insults, fear led to character attacks. I found myself being accused of never really believing, for wanting to sin, for not having enough faith, and for needing to grow up.

No one has sat down with me to listen to why I no longer believe. No one has taken the time to really understand. They just excuse it all away, tell me they are praying for me, and that god truly does love me. It's as painful to me to hear as if I were to tell them Satan truly loves them.

The first statement: "I'm praying for you" is offensive because I don't believe there is a god. It is also offensive because it ends up being the least amount of work for the greatest suspected return. Instead of actually calling me up to have a conversation, they will pray for me instead.

The second statement: "Eventually god will reveal himself to you" is offensive because I don't believe in god and therefore do not believe there will ever be a revelation. My first years of life I was raised in a strict gospel, where I learned who god was. As I grew up, I was taught he would answer prayers. When things happened how I prayed, god answered. When they didn't, god was testing me, or I prayed wrong. The result always ended up being in this invisible god's favor. No matter the outcome, it always pointed to god. When the logical conclusion still evaded me. How many people have prayed for something and it hasn't happened? The child being raped? The mother starving? The earnest man seeking? Why would a god pick and choose and what is the criteria? So telling me to wait on god's eventual revelation with absolutely no idea of what is necessary or if it will actually happen is ignorant.

The third statement: "You must not have been a true Christian". As a Mormon, I was immersed in Christian culture. I was schooled in the gospel. I prayed morning and night, fasted, paid tithing. I gave talks, bore testimony, was baptized, took sacrament, eventually was endowed and sealed in the temple. I believed with all my heart heavenly father was real. I had my questions, I had my doubts, but I believed through it all there was a heavenly father and I would see him again. When I discovered Mormonism was fake, that god didn't exist, I felt betrayed. I felt played. My whole foundation was swept out from under me. Trying to figure it out I was shamed, judged and told I never really believed. It discredited my whole Mormon experience, and my feelings and my testimony and my eventual leaving.

The fifth statement: "You can't have morals without god". This statement scares me. First of all, morals were created by humans in order to have cohesive working societies. They have always been a construct of man. There are no absolute morals. To say a person cannot be moral without god, also makes me wonder how many people are only moral because of the threat of god. If a person cannot be good without god, that makes me nervous. If a man will only not cheat on his wife because of god, not because he loves her or considered her feelings, is he really that good of a man? Atheists are special because they choose to be moral and good with no promise of reward. They are good for goodness sake, not because anyone is commanding them. So I ask you, who actually is moral?

The sixth statement: "God still loves you". Saying this to someone who does not believe in god is offensive and patronizing. It is disrespectful and hurtful. Were I to say to a Christian, Allah still loves you, they would be irate. Were I to say to a Christan, Satan still has hope for your soul, you can still go back to him, they would be livid. And yet, they are so privileged in their thinking, they are doing right by me by telling me God loves me, but have absolutely no regard for how their convoluted platitudes make me feel.

The seventh statement: "You deny god, because you want to sin". I've told this story before, but I was accused of immorality when someone I knew found out I no longer believed in god. It must have been the only reason I would leave, that I wanted to sin. I wanted to prostitute myself, cheat on my husband, get sloppy drunk, smoke cigarettes, commit crimes. That was the only reason I would deny god, so I could eat drink and be merry. No, that is not the only reason. The majority of people who leave the Mormon church do so for moral, ethical and philosophical reasons. It starts out with learning the true history of the creation of the church, and slowly progresses to problem of evil, the impossible nature of deity, the exploitation of women. Until finally you cannot stomach the vomit any longer and spew it out. It wasn't easy. I tried drinking the koolaid for as long as I could, I kept praying with no answer, kept paying my tithing and going through insane temple rituals, hoping god would reveal the truth. Nothing happened, and the more I tried to prove god was real, the more I proved to myself that he wasn't. As I dug and dug and dug looking for answers to my questions, I found them. But they were not what I was expecting. No, I did not leave to sin, I left because it would be immoral to stay.

The sixth statement: "The fool says in his heart, there is no god".  Religious folk automatically assume that everyone else is more dumb than they are. Because they know the truth, they do not need science. Science could never explain god's intricacies. Such as how eyes work......or why potassium channels in cells accept potassium. Godless people have no merit, they will never know what the religious people know. And all of their learning means nothing if it is without god. My husband for instance, is never taken seriously by his religious family, even though his education and experience far surpasses their own. Yet because he has achieved his education without god, it is not worthy of respect. He is a fool. This bothers me to no end. How christians have no respect for science, for progress, for our earth. The heal meningitis with maple syrup and burn fossil fuels like there is no tomorrow. They think god created cell phones and helped them to find the perfect pair of shoes for prom. They praise god the surgery went well instead of the surgeon. The kiss their hands to heaven when things go they win a competition, instead of thanking the person who issued their win. Its utterly ridiculous, and yet people who reside in reality are the fools.

The ninth statement: "You're just going through a stage". I said this exact thing to my husband. And then later it was said to me by a family member. Its just a phase, you want to explore the world and live in sin, eventually something horrible enough will happen that will bring you back to god. You need to be humbled of your pride. Sadly, there are somethings you just can't come back from. Like learning Joseph Smith had an abortion clinic in one of his settlements, and married girls as young as 14. When you read all 5 versions of the first vision and notice the huge discrepancies. When you realize how poorly women are treated in Mormon culture and how unequal they are regarded in the doctrine. When you see the church leadership publicly ostracize homosexuals from worship. It's not a phase, it's not a stage when you realize just how unethical Christianity is. How telling someone they are inherently sinful and need your help to repent is wrong on so many moral levels. To go back would be as disgusting as a woman going back to an abusive husband.

The tenth statement: "You are being fooled by the devil". Chances are if a person doesn't believe in god, t hey don't believe in the devil either. Its just as laughable to tell someone they are being fooled by a fairy. It also automatically attributes our efforts, thoughts and actions to evil. It is offensive and mean to tell someone they are being guided by satan, a christian construction to explain the evils of the world. It also happens to be a last resort in many cases, where nothing else has worked, so it must be satan influencing you. I'm happy to say, thinking for myself is wonderful. I was scared at first, but as I kept telling myself I'd never had a prayer answered, and therefor all of my ideas were mine to begin with, I became less afraid of doing things of my own accord. Making decisions based on experience and reality, rather than what a bunch of white elitist chauvinistic homophobes thought I should be doing. I was fooled by their cunning lies long enough, and they stole too much of my hard earned income to pay for their mall. No dear friends, it is you who are being fooled by crafty conmen who have done exceptionally well for centuries controlling trusting and ignorant well-doers.