How I was Taught to Hate Myself 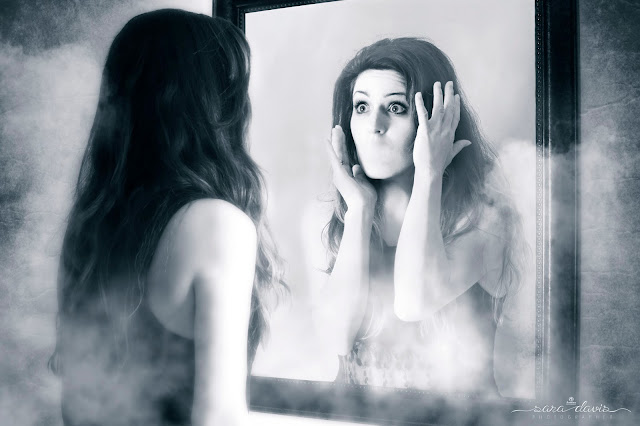 When I was a child, the dream of the celestial kingdom seemed like an achievable goal. But as I grew up, and was drown further into Mormon Doctrine, I discovered it wasn't achievable. I was taught new shames every Sunday. Reminded of what a fallen and sinful person I was, and how much I needed a savior. Now, I wasn't a crazy kid. I never did drugs, I never had premarital relations. I went to church, seminary, did my service projects, earned my young woman's medallion, got good grades, listened to my parents. I wasn't a juvenile delinquent, and yet I was constantly made to feel guilty about who I was.

Anytime a swear word popped up in a movie, I felt like I had been dropped in a vat of spiders. Anytime I saw a girl's shoulders, I pitied her for her immodesty, and judged her for wanting to attract the "wrong kind of boy". Anytime I saw a tattoo, I wondered what kind of a dirty person they were.

And then I lay awake at night, dreading my eventual death because there was no way a horrible person like me would ever make it to the celestial kingdom. I was going to fail.  It haunted me. It caused me anxiety.

At church I was taught that my only dignified and celebrated destiny was to be a mother. And I felt and anytime I considered doing anything else. I would scold myself for even considering anything other than motherhood. I was taught that the way I behaved and dressed either labeled me a woman of god or an easy woman of the world. And that my dress was responsible for the bad thoughts in boys. We had bishopric talks where they would tell us "its your responsibility to help the boys, to help keep their thoughts pure". That responsibility was placed on my shoulders. When it never should have been.

I was ashamed of my body. I remember in the 10th grade, my sister gave me a shirt that was too big for me. I wore it proudly, like a tent, feeling that I was so modest because my breasts had no shape in it. For my brother's wedding, I was forced to wear my sister-in-law's little sisters camisole over my dress instead of the wrap like the older girls were wearing. Because the immodesty of it broke my mothers heart and she cried in the bathroom about it. I was embarrassed. You couldn't see my shoulders at all with the wrap, it was even offered to be pinned on. But it was the implication and the message. It was immodest. After that I became obsessed over modesty, and looked like an oaf through high school. I dressed homely, and in clothes that were always too big. I looked horrible, but I thought I was doing god's will. I had zero self esteem. I felt ugly. I felt worthless. I felt like a piece of meat.

But I was a regular heterosexual teenage girl, and I wanted boys' attention. Now I understand why I didn't really get it. I laugh about it now, it's pretty funny in hindsight, particularly when I look at pictures of myself from high school. I think, man I could have worn something different and looked so much better.

So I was conditioned believe I was responsible for men's thoughts and actions, that my only calling in this life was to be a wife and mother, and that I wasn't good enough to make it on my own and that even with god's help, statistically I probably wasn't going to b exalted. Does that sound like a recipe for confidence? For success? For happiness? Damn, I sure hope not.

And then I got married, and those things started to actually matter. I quit my awesome job to be a mother. I gave up modest clothes for ultra modest clothes. I found myself and my "poor" spirituality under constant attack and scrutiny, and it caused me more anxiety, more pain. I felt like no matter what I did, it wasn't enough. And the spiritual failing of my home became a burden on my shoulders. I felt guilty. I felt isolated. I felt ashamed with each relief society lesson about maintaining a godly home. I felt inadequate when my prayers remained unanswered, because the fault surely was with me.

And then when I'd absolutely had enough, I made a choice. I was done. I'm sad that I had no choice in the life I was born into. I was always jealous of my husband, because he was able to choose to be a member of the Mormon church, I never had that choice. I was born into it. And at 8, it was expected of me to be baptized. It was beaten into my head to be sealed in the temple. It was burned into my brain to be a mother. I had no choice. I was coerced into virtually ever decision I made, with my family being held hostage. Do this or lose your family, do that or be alone for eternity, become this or you will be the weak link that breaks the chain. It was fear that motivated me, not love. It was fear and self loathing that kept me paying 10% of everything I earned to my abusers.

That's why I say no more. And that is why I am so passionate about helping others to see what took me so much time and pain to realize. The Mormon church is an abusive cult that harms women especially. It perpetuates gender stereotypical shaming and rape culture. And I am so glad I am no longer a part of it. Though, unfortunately, it will continue to haunt me for the rest of my life.