I Believe Religious Indoctrination of Children is Abusive 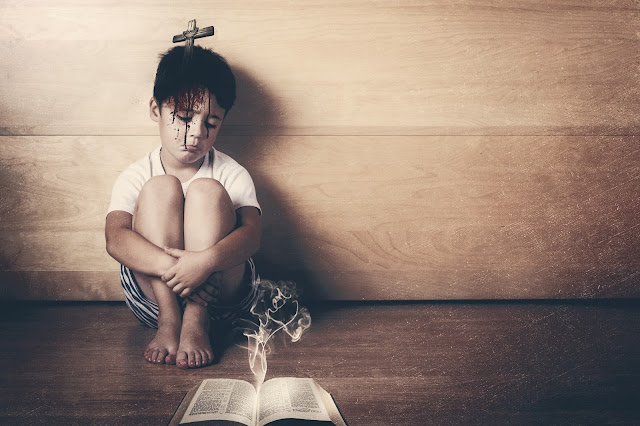 As I've pondered how religion is perpetuated, I've done a lot of thinking about what it would take to stop.

I think humanity is inherently "spiritual": affected by its surroundings in otherwise unexplainable ways, and intimately connected to living things. We define spirituality in terms of superstition, goose bumps and familiarity. We get chills when something moves us, we yearn to have and serve a purpose. We are motivated by rewards.

Humanity is set up to fall under the spell of religious superstition. Perhaps it is merely a biological construct that was advantageous early in our evolution and has now become so engrained in our genetic code its difficult to escape. As as we teach it to our children from birth, they grow up programmed into the religion of their fathers and perpetuate it into the next generation.

Religion survives because we indoctrinate children.

I knew god existed when I was a child. There was no alternative. It was what I was taught to believe from birth. Anytime my theology would be contended, by friends or acquaintances, there was nothing they could say that would convince me god didn't exist. It was so engrained in my mind, and there was never an alternative presented. I didn't know any different. I couldn't fathom how anyone could live a godless life when I saw him in everything.

But I was conditioned to see him in everything. With no prior disposition to deity, I would never have looked at a sunset and thought of a god. Because I would have no reference to assume the sunset denoted a god. I would merely see a sunset. A Jehovahs' Witness member tried to contend this very point with me when, pointing at my house, asked me if I had seen my house built. I told him no. And he said, so it is with god and the sunset. I asked him, sir, have you ever seen a house being built? He said yes. So then I asked, have you ever seen god make the sun set? He said he had. I asked him how this was possible. He said because he knew god was the creator and so he saw god in the sunset. I tried to explain how his example failed, because we have evidence of home builders building homes yet no evidence of god making sunsets. We do know that the earth rotates and revolves around the sun, which creates the sunset. But he thought I was crazy.

Pretend for a moment, you are a child. And you have never seen a house being built. You could sit in the driveway for days staring at the house, never knowing how it came to be. Perhaps you might come up with your own idea for how it happened. Maybe a Beaver made it. Perhaps you should worship the Beaver because he made you shelter. You tell your friends, Beaver is the creator of homes and deserves love and admiration. Your loving parent one day takes you to a construction site and introduces you to one of the architects. He shows you around the framework of the home he is designing and explains how homes are built. You go home, no longer needing the story of the Beaver, because now you know how homes are built.

It seems so simple. We have so many answers now for questions that originally were not understood. Humans used god to explain things they didn't understand, like the sun rising and setting, like death, like natural disasters. Humans also used gods to take advantage of the weak. The problem is, we still have so many questions that remain unanswered. There are some things we may never answer. And religion uses that to denote a god. I do not know, therefore GOD.

However, just because the child didn't know an architect was responsible for the design of his home, doesn't justify his worship of a Beaver. This example still doesn't work completely, because it assumes a creator is needed. Its something humans have a hard time grasping, things coming into existence on their own. When a tree grows, god made it grow. When a child is born, god gave that child life. How can anything happen without an instigator? A creator? something or someone in charge? They are valid questions, but filling in these gaps of existence with god does nothing to further our understanding of how our universe works. It causes complacency.

It is those who have questioned who have taken our species forward in understanding how our world works.

If we hardwired our children's brains for science instead of god, religion would die out in a mere few generations. It would be unable to survive if we didn't force it on the minds of children too young to know any different. If we gave them alternatives to god they wouldn't resort to superstition and push out reality. We do this because it was done to us, and we seek to recruit others to perpetuate the god delusion. Its taught and preached because it is part of who we are.

Leaving the religion of my parents was very difficult for me. I still have so many problems that I will deal with for the rest of my life, like being uncomfortable with alcohol, the hairs on the back of my neck standing up when I hear "oh my god". The sadness I will carry knowing I will never see my grandpa again, when I used to think I would. But we perpetuate ignorance, and condition children to love superstition and therefore we perpetuate harmful religion.

And I firmly believe religion would die out in a matter of decades if we stopped teaching it to our children. It wouldn't be able to survive if we didn't indoctrinate children with no prior experience to other world views. If they were educated and called upon to make the choice for themselves in their later years, I believe they wouldn't choose to serve an untenable entity that calls them a sinner simply for being human.
Posted by Sara at 8:45 AM