Is Mormonism a Cult?

I've heard some pretty crazy things since leaving the church. But honestly, the most crazy stuff has come right out of the mouths of the still faithful. Why is it that members are so bitter and angry towards those who leave?

Is it because we are a threat? Because they are afraid of us? Because they fear becoming like us? Why do they tell us we are liars when we talk truthfully about the church? Why do they resort to name calling, character attacks, and threats?

"You will be held accountable for the lies you spread" 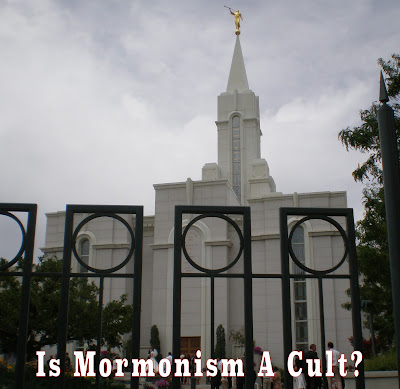 "You will have to answer for your sins"

"You are proof of Satan's existence"

"You will regret your choices"

"You will lose your family"

"You are the weak link in the chain"

If these comments sound loving, you are insane.

Members of the Church of Jesus Christ of Latter Day Saints are ignorant of something: they belong to a cult. A very very large one, but a cult nonetheless. And when someone escapes the cult, they receive quite a backlash. From being shunned and disowned, and being told they never really believed, to being threatened with eternal damnation.

Sounds like a great way to get people to come back, right? Several times, voicing my opinion of the church since leaving, I was antagonized. I was bullied. I was told i was the know-it-all in a thread involving 10 people against one. I've been told I have an agenda. I've been told I will regret what I'm doing. I was even threatened in my letter confirming my resignation with the eternal consequences of my choices.

A cult can be defined by several criteria:

Mormonism is a relatively new, small religious group. It centers around sacred rituals with symbols. It is considered strange (a peculiar people) and extreme by outsiders. It is lead by a group of charismatic men, who are praised with hero-worship by the members. There are many psychological techniques employed to control membership.

How many times did the congregation erupt into applause anytime President Hinckley raised his cane? How many girls and guys go gaga at the opportunity to shake the hand of a general authority?  How many times do members sing "Praise to the Man" or "We Thank Thee O God, For a Prophet" with vigor and much weeping? How many Sunday school lessons center around the eternal family, and how you can lose it? Why do members pay tithing? So they won't be burned at the last day. Why do members learn all of the signs and tokens? To pass by the angels and claim their godhood. Do member's dress and eating habits set them apart from the rest of the world? Are members encouraged to not marry outside of the faith?

And members are warned about the outside world. It is a dark, scary place with devious people. It is a fallen world to save. Members are even more warned about anyone who "turns against the light". And those who "lean unto their own understanding". Most recently, they have been told to "disconnect immediately with those who have lost the faith". Why?

Why are Mormons so defensive and afraid of information? They defend their doctrine and their leaders to a fault, with anger, and malice, and judgement. They attack your character, rather than ideas. I have found myself in numerous arguments where I have been attacked, being called names and being told I would face judgement. By people who are supposedly Christians! What is wrong with Mormons? They seem so nice and so sweet when you are a member, or a potential member, but the minute they see you as a threat, they get violent.

I've had several people I don't even know comment on this very blog, telling me I have no idea what I'm talking about. That I never believed. That I'm lying. That I will answer for my sins. What the hell is wrong with Mormons? Don't they have missionary discussions to preach to the neighbors? I mean, good gawd are they a scary bunch of folks.

They have this need, this ridiculous addiction to making everyone see the world the way they see it. To justifying and defending their belief, even if they aren't actually being attacked. I could post something on my Facebook wall, not directed at anyone, just something not Mormon promoting, and have Mormons swoop down and tell me how I am offending them and how I have zero respect for their beliefs. Its' ridiculous!

Mormons, sadly, are cultists. They don't realize it, but they are. Just because it is a large cult, doesn't mean it isn't one. It controls what they can watch, read, eat, support, become. It controls their actions, their thoughts, their education, their interactions. And they literally worship their leaders. Their faultless leaders. Sure, they are men and imperfect, but have you ever heard a Mormon say their leaders are WRONG??? No, because they actually think they are INFALLIBLE! And they will defend their bad choices even when they are shown to be bad choices. That is just mind blowing!

They bear testimony of JOSEPH SMITH! GAH! An oversexed conman who was actually damn brilliant and created a whole religion out of hat! "he was a farm boy, ignorant and uneducated, he couldn't have written the Book of Mormon". HAH!!!! He wasn't ignorant. He was a freakin genius and he got a lot of people to think he was a prophet! A lot of ladies especially, he never had a problem with the ladies. Just had to tell them god threatened him with a flaming sword, and off to bed they went.

I wish I were making this up. But I'm not. So call me a liar all you want, but you may want to do your research before you do. You might be surprised to discover, hey yeah, you are part of a cult. And you should probably stop thinking all of us ex-mos are going to hell, because, there isn't one. Unless you count the one you are self inflicting upon yourself as the member of a crazy religious cult.

PS, why are you reading this anyways? It's not on the first presidency approved list of reading material. Why don't you go back to trying to figure out how the brother of Jared knew about pane windows or how Heleman road into battle on a tapir?
😂😂😂