We Need More Boys in Dresses 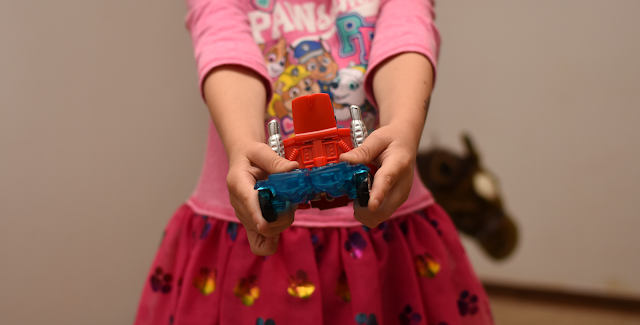 I'm not much of a dress wearer, so it took a bit of effort for me to dawn a dress today to support my son who wanted to wear his dress.

Yep, you heard that right, my son.  He likes to blur the lines between masculine and feminine, as he is interested. Which means, some days he likes to wear a dress, some days it's princess shoes and his Flash t-shirt, and other days it's sweatpants and a tank top. He has a stuffed puppy that will sometimes wear a dress, and a supply of horses for his barn and Hotwheels for his track. His favorite tv shows include Doc McStuffins, The Magic School Bus, My Little Pony, Animal Mechanicals, and Rescue Bots. He loves Elsa and Gizelle, but he also loves Batman and The Flash.

He occupies that middle space between what our culture deems masculine and feminine, and he is happy there. I hope he will continue to be happy there.

It's interesting; when I was a little girl, I preferred sweatpants and baggy t-shirts. I would often sneak my brothers clothes to wear, and my favorite dress-up character was Han Solo (for which I needed my brother's suit vest....). My dad even bought me a genuine Han Solo Blaster. I hung out with boys mostly, I didn't have many girl friends. And I had a group of boy followers for many years, kind of like the little rascals. We did everything from collecting bugs, to smashing rocks, to exploring the wilderness. We even made bouncy balls out of volcanic ash and fresh tar (don't ask...) But no one ever thought it was unusual for me to wear boys clothing and be a rambunctious outdoor kid.

Now, I was expected to wear dresses and frilly socks for family gatherings and church meetings. And if I sat with my legs open, I was chastised for not being ladylike. My mother abhorred my burping, telling me I sounded like a drunken sailor. And I would get annoyed when my guy friends suggested I be the girl (like when we played Balto, they said I should be Jenna). But overall, my occupation of the gender middle space was not concerning to anyone. No one thought I was abnormal for being a "tomboy".

So why is it that we don't afford boys the same opportunity? There is a line in Orange is the New Black that struck me: "Why would he choose that? It's like winning the lottery and giving it back", says the assistant warden of the character Sophia, a transgender woman. Now, I can relate a little bit. Women are still second class citizens; we don't enjoy the power and privilege that men do. So when we hear of a man essentially giving up his power in that way, we are disturbed. But thinking of it in that way only empowers the oppressors. Women are not second class citizens, we are not the inferior or weaker sex. When a woman behaves in a masculine way, she presents with power. But when a man behaves in a feminine way, he presents weakness. Why is that? Why do we still equate femininity with weakness?

Gender norms and conditioning are socially constructed and responsive. This explains why there are many variations of what is considered masculine and feminine, and just how big of a chasm separates the two. In western culture, there is a significant and very obvious divide between what is considered masculine and feminine, and while it is becoming more acceptable for women to transgress the boundaries of feminine, men are still not afforded that opportunity. It is still strange to see a boy wanting to wear a dress. It is still strange if he wants to play with a doll or have his nails painted. But there is absolutely nothing objectively feminine about color on the nails, or pants versus a skirt. Before 1940 is was perfectly acceptable for boys to wear pink and have a frilly trim around their cuffs. In Victorian times, boys and girls were dressed in similar styles and both wore long hair. High heels were a statement of fashion and status for gentlemen at one point. But as western culture became more fearful of homosexuality, norms for boys changed, and intimate interactions with females and femininity were feared causes of becoming gay. Which anyone with an ounce of biological sense knows is not the case. A boy who interacts closely with his mother or his dolls will not "turn" gay. And if he is gay, there is nothing wrong or unnatural about that either. I like how one researcher put it: its like left-handedness, uncommon but NOT unnatural.

So why do we need more boys in dresses? Because we need to break down the social barriers that separate men and women. And we need to liberate men from the confines of toxic masculinity that force them to conform to an ideal that they can never achieve. Men have the same emotions as women, its high time we let them show it. Clothing should never be about gender conformity, but rather self-expression. And we shouldn't teach children that dresses are "girly" or "for girls". Dresses are items of clothing that can be worn by anyone who enjoys that airy and loose feeling, or who want to show legs, or be cooler, or who feel good in a dress. Just as pants are no longer reserved for just men, dresses should not be reserved for just women. And the more men and boys wear dresses, with such an obvious statement of non-gender conformity, other less obvious facets are sure to follow. The more boys cuddle with baby dolls and play house, the more natural nurturing and interpersonal relationships will be to men. The more boys take on traditionally female roles and activities, the more empathetic and understanding they will be of what it means to be feminine, and the more they will realize that those labels are subjective associations we humans make.

We need more boys in dresses the same way we needed girls to wear pants. We need to dismantle the gender scripts that govern our daily existence and just be people. And that is why my son is a hero.
Posted by Sara at 6:52 PM