Two Legged Creature Will Believe Anything You Tell Them


Religion was created by man.

Religion fabricates sin to generate guilt to establish a need for god in order to gain control and obtain money.

Always be wary of the salesman who tells you that you have a problem and also offers you the solution to that problem. It is a sales tactic, and many people have fallen for it.

Well, hello sir, ma'am. It has come to my attention that you don't have a security system installed in your home. Did you know there are burglars who will break into your house if you don't have one? I just happen to be selling security systems, the exact kind you will need for your neighborhood, and budget! Just sign here and you can sleep safely tonight.

Well, hello sir, ma'am. It has come to my attention that you do not have God in your life. Did you know that you are living in sin and will burn in hell for all eternity unless you accept Jesus Christ as your Lord and Savior? I just happen to have a way for you to be saved, by reading this Bible and being baptized of the Spirit. Just sign here and you can sleep safely for eternity.

Religion began as a simple superstition. A way for mankind to explain the otherwise unexplainable. Why does the sun set? Must be by god's power. Why was there  drought? God must be angry, let us do something to appease him. And as superstition evolved into religion, certain people stepped up to be the mouthpiece of deity. From the Priests of Ra, to the Shaman's of Odin, to the Bishops of Avalon, to the Popes of Jesus, they all began to require something for salvation: money. Tithes and offerings became the ticket into god's kingdom.

But how do you keep people paying? You make them feel like they have no choice. You create sin, which creates guilt, which creates the need to repent, which requires a savior. And you create sin to center around the most basic of human needs so that it is sure to keep happening. For example, much of sin centers around human sexuality, passion, and pleasure.

For Mormons, attending the temple is a central part of the religion. In the temple you save yourself, and you save others by proxy. You can only attend the temple if you are worthy, which means constant repentance. You also can only attend the temple if you are a full tithe payer. Which means, you have to pay to enter. Its disguised as a commandment from god, but it's just as sleazy as if it came from the door to door salesman. But instead of using the threat of burglars, they use the threat of losing your eternal family.

I was taught growing up that mega church's were disrespectful, and not reverent. That large churches with booming music and crazy dancing were not the proper way to worship god. That if we were quiet and reverent we'd be better able to hear god's spirit. That if we were surrounded by beauty and elegance, we'd be reminded of the celestial kingdom.

As I've grown, I've discovered there is no real difference. In the Mormon church, they have large "mega" buildings. Multimillion dollar conference centers and temples with satellite capabilities and giant screens to broadcast to the largest audience possible. They have loud music, just with a slow tempo and conservative feel. The extravagant interior and exterior of the temples is ostentatious and spits upon the message of conservatism and charity. The tactics are a little different, but the message and end results are all the same. You are inherently sinful, you need god to be saved, and god requires your penance and your pennies.

Recently, I saw a men on Facebook, with a heavily laden sheep. It had escaped it's shepherd and therefore had grown over 60lb of wool. The Christian message was that Christ as the good shepherd, would have shorn the sheep, and his burden would have been light. But here's the funny part.....sheep didn't evolve to produce massive amounts of wool. Wild sheep do not need to be shorn. Domesticated sheep have been selectively bred BY MAN to produce wool that needs to be trimmed. For mankind's benefit. In essence, religious followers, or god's sheep, have also been taught to feel the need to be "unburdened". However, without being selectively bred to believe they are burdened with sin, they would never have need to be unburdened. And certainly never by way of paying money to those who say they speak for god.

As Mr. Merriweather explained to a young Jack Crabb in Little Big Man: 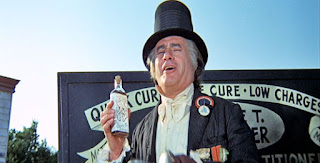 "Those stars twinkle in a void there boy and the two legged creature dreams and schemes beneath them, all in vain. Listen to me, a two legged creature will believe anything and the more preposterous the better: whales speak French at the bottom of the sea. The horses of Arabia have silver wings. Pygmies mate with elephants in darkest Africa. I have sold all those propositions."

"Or maybe we're all fools and none of it matters."