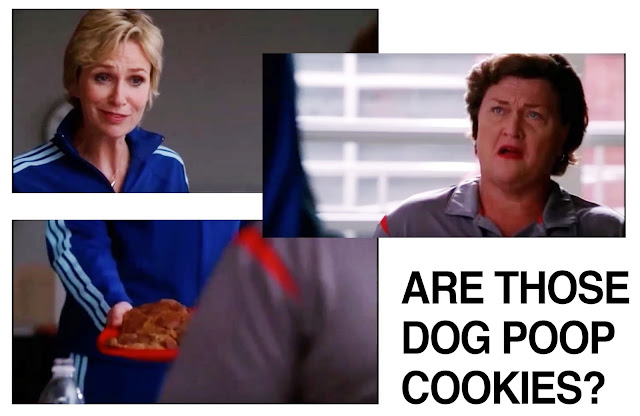 Probably one of the best scenes in Glee is when a vengeful Sue Sylvester hands Coach Beiste a plate of cookies. One whiff and Coach goes, "ugh those smell like dog poop, are those DOG POOP cookies??"

Lately, however, I've been thinking of this dog poop analogy in a different way. In a religious way. In a Mormon way. Let's pretend the doctrine of the Mormon church is a cookie, and all of the dark parts, paradoxical parts, inconsistent parts, hidden parts, cherry picked parts, are dog poop.

Eww! Suddenly its all very unappetizing. A religion laced with feces. But here's the kicker, they are asking you to eat around the poopy bits. Because hey, there's still some cookie in there, with the brown sugar and butter. It may smell of poop, but if you plug your nose and just pick out the brown spots, you won't even notice.

Just ignore all of Joseph's wives, or his child brides. Don't even think about the Adam-God theory. Forget about the throat slit in the temple ceremony. What was that thing about not eating meat out of season in the word of wisdom again? Oh my goodness, I completely forgot about the Kinderhook plates and the Book of Breathings. And Joseph Smith was a treasure hunter? Yeah, that stuff about Blacks and the priesthood, that's some smelly poop. And women in the eternities, thats a lot of poo if I ever smelled any. And conversion therapy, that's like the wet sticky dog diarrhea you can't get off the bottom of your shoe no matter how many times you drag it through the grass.

The thing is, the church likes to cover this fecal matter up with lovely press conferences and advertisements about charity work and modest clothing campaigns. Wow! Another doctrine just plagued with the poopies, modesty. Beautiful clothes for covering up and continuing female body shaming and rape culture. But it smells good because we add lace to the bottom of cap sleeved shirts. Can't even smell the stink of the doctrine behind it.

Can't smell the stink behind the doctrine of apostasy in regards to LGBTQ members and their children. They smiled while they said it was god's love that inspired the new policy, and made sure to add extra vanilla before baking so the devout members could still choke it down.

The Church of Jesus Christ of Latter Day Saints is one big cookie. One BIG dog poop cookie. And just like my momma said, you can't take the poop out and still have a good cookie. You can't eat around the poop without getting some of it in your mouth. And you certainly would never dream of eating the cookie poop and all, unless someone told you the poop was chocolate and you were conditioned since birth to smell and taste chocolate instead of poop.

And thats the thing. Those of us on the outside, having tasted of the poop and fallen away, now realize how disgusting it was and have been using Listerine ever since. But there's just something about religious poop; you can't digest and expel it so easily. It stays with you, like a recurring nightmare. Like the indigestion from hell.

So before you help yourself to another plate this Sunday, try visiting a bakery to discover what real chocolate smells like. I recommend several great bakeries to get you started:

Mix together and let sit until it makes sense. Bake for 8-10 minutes or until reasonably sound. Best served warm
Posted by Sara at 4:00 PM